The Background of GHS: Why the Need 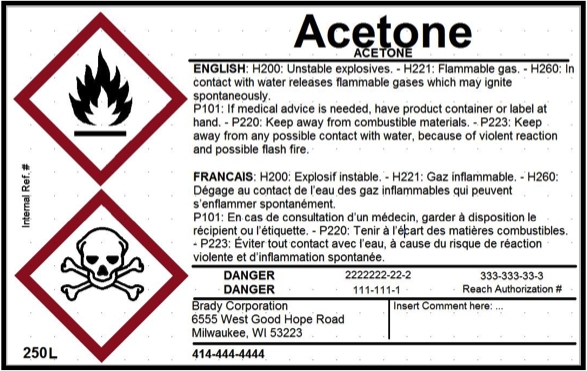 Why the need?
The UN came together, realizing that there was a global need for harmonizing the communication of hazardous chemicals.  Each country had some sort of system, however with each looking and saying very different information, it was not easy to understand.  The matters are complicated with many chemical manufacturers shipping product into multiple countries, and the local country possibly not even understanding the information on the label that comes in the door.
Country-by-country, around the globe, hazard classification and communication laws are similar in purpose, but different enough to result in inconsistent hazard classification for similar products, and dissimilar looking labels and SDS.
Need to harmonize and improve safety information and facilitate international trade through compatible classification methods, SDS and labels.

GHS was formally adopted in 2002

How GHS accomplishes that goal

What is GHS
This showcases the different styles and types of hazardous chemical formats in various countries/regions.  All of these styles (Figure 1 -3 shown below) will now move to the GHS format ( figure 4 shown below) GHS Status in America.

GHS Status in America
As discussed, in the US it’s in final stages of development.
In Canada, Health Canada is the responsible agency for overseeing adoption of GHS.  Health Canada is currently reviewing GHS for incorporation into WHMIS.  It’s further hoped and anticipated that the finalized regulation will be very comparable to the US regulation.  That is also of course a primary objective of what the UN and all participating countries are bent on accomplishing.
Mexico has actually come forward with a voluntary standard that addresses GHS, NMXR019SCFI-2011.  However its pre-existing communication regulation, NOM018STPS-2000 still remains in force.  This results in dual labeling and SDS’s Companies exporting and importing from nations that have implemented GHS are expected to comply with both.  I understand that the ANIQ national association has requested authorization from the Labor Secretary to develop an alternate procedure that can comply with both.
Finally, Brazil has implemented GHS for substances, following the course that the EU has taken, and has set a date of 1st of June 2015, for mixtures.
United States – adopted by OSHA as of May 2012
Canada – Reviewing for development:

GHS Status in Europe & Around the Globe
Looking to Europe and the ROW, 27 EU countries + 3 candidate countries + 3 EEA countries. The previous European system, HSID, can no longer be used for Substances.  While it can still be used for Mixtures, Manufacturers/ Producers/Distributors cannot apply both systems on labels.
Every SDS must display all required information in both systems until June, 1st – 2015.
Also, the original CLP regulation is based on the 2nd edition of the Purple Book.  This past March a second technical adaptation, regulation 286/2011 was published, so now CLP is fully based on the 3rd edition of the Purple Book
This Technical Adaptation gives: New additional combined “H” phrases
Some exemptions in term of the usage of certain pictograms
The size of each pictogram is more specifically specified in regards of the size of label. No new things but more precise.
27 EU Countries – Implemented under Regulation 1272/2008

Impact of GHS for U.S. Businesses