Posted by Katie Breton on December 7, 2011 under Labels

Did you know that product counterfeiting is a multi-billion dollar business in the United States? Here at Whitlam Group, we provide security labels that will protect your company, brand, and products from these thieves.
In the previous blog, “How do Security Labels Enhance a Product’s Protection?,” we introduced you to the different kinds of security labels we provide, but it’s also important to know the reasons why to protect yourself from illegal counterfeiting.
Billions of dollars are lost annually to product counterfeiters. They recreate products and sell them as if they are the real thing and while it’s illegal it’s also very dangerous. The products they’re selling are sold at a lower price than the real ones, but are not made to the same standards, which can have devastating results. According to the International AntiCounterfeiting Coalition, the trade of counterfeited goods has increased from $5.5 billion in 1982 to $600 billion annually in 2007, and it’s even higher today. This is why it’s crucial to take advantage of Whitlam’s security labels. 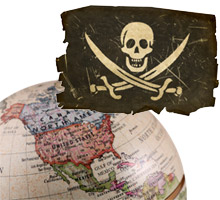 It’s also very important to know that your company isn’t the only entity that can be harmed by counterfeiting. Consumers, retailers, and manufacturers are all at risk.
For consumers, the risks aren’t as simple as losing money, but more about the safety of the product itself. Some of the goods that are counterfeited the most include electrical products, pharmaceuticals, car parts, airplane parts, baby formula, and over-the-counter medicines. Using these products can expose consumers to health and safety risks. If someone purchases illegitimately-produced baby formula, there’s a strong chance that his or her baby could get sick. Similar risks pertain to auto parts as well. If someone has a counterfeited product installed in his or her car, it could result in a mechanical malfunction, thus possibly resulting in dire consequences.
Another worry for consumers is the amount of jobs lost due to counterfeiting; it’s estimated that by 2007 more than 750,000 will be lost, with even more being lost today. This not only hurts the economy by putting people out of work, but also means that fewer products are being produced and further damaging the economy in the long run.
Speaking of the economy, retailers are also at risk. They’re responsible for the products they sell and if they sell illegitimate goods, whether they are aware of it or not, they must be held accountable. The sale of counterfeited products is illegal and can often lead to product recalls, which costs retailers millions of dollars annually.
The risks facing manufacturers are very similar to those of retailers, but one that stands apart is the damage that can be done to their brand’s reputation. If a counterfeited product is sold as if it was made by a company and turns out to be faulty, it can hurt the manufacturer’s reputation. If a company loses its positive reputation, it becomes very hard to repair that damage. This makes protecting your company’s image is crucial in today’s fast-paced, digital world.
We want to help protect your company. Contact Us and we will discuss how we can make your company, brand, or product safer against counterfeiting. It’s never too late to protect yourself!